I love what the marketing team at Dollar Shave Club does: I’ve always found their messages to be that perfect blend of witty and meaningful. A few weeks back, my wife said she wanted to get a subscription to the Dollar Shave Club as well. Since I had always thought of them as a “men’s brand” I was surprised. She sent me a message with the attached ad as an explanation: 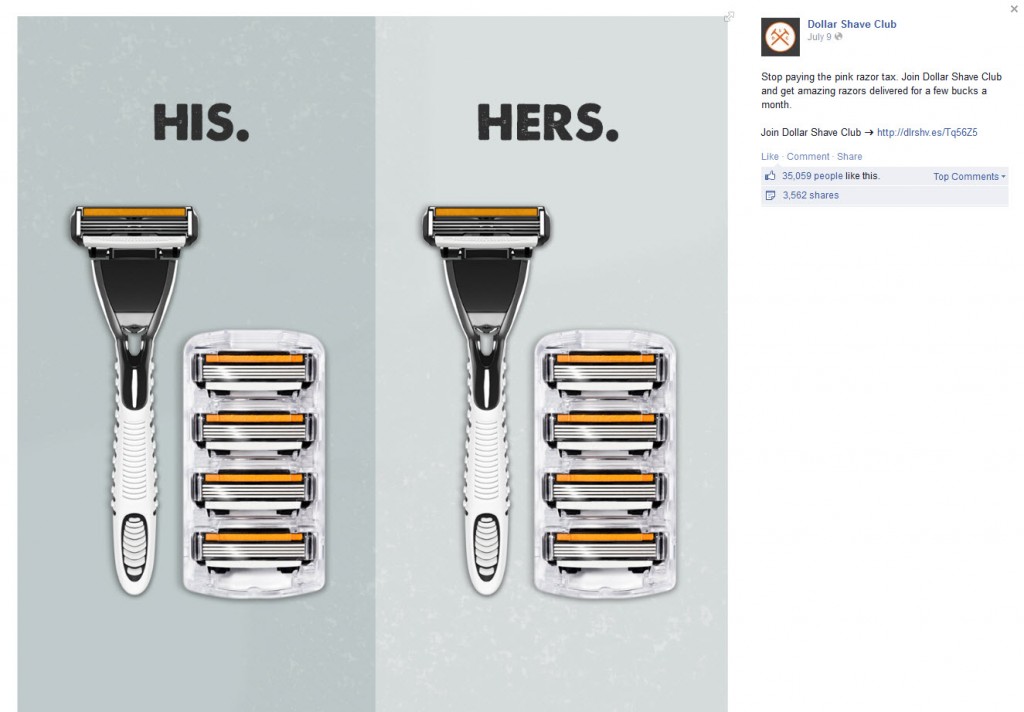 The genius step that increased their reach 100%

If you’ve ever been to their site, it’s not hard to see that men are their target audience. However, there are other values that their buyers espouse (that don’t require you to be a man to appreciate): 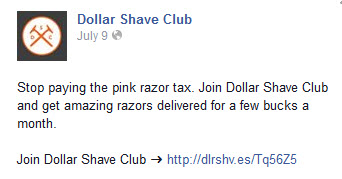 This fantastic ad that Dollar Shave club delivered to my wife encompassed multiple points from their message: Get a high quality, simple product while spending less money. The lately popular idea of, “Hey ladies, the other brands are making you pay more because you’re a woman” is just the icing on the cake for this advertisement.

Obviously I don’t have access to their Google Analytics or thier point of sale database, but judging by the social traction this post had got, I’d say they’ve really launched a winner:

Spend a few minutes browsing the comments for this ad if you’re not already convinced about the success. People willing to comment on a razor advertisement on Facebook? You must be doing something right and really resonating with them to get that kind of response.

Where to go from here?

The major thing missing from this campaign is a specific landing page (or even down the road; complete version of the site) built around this message. It will take careful planning, of coure, to not compromise the frugality/simplicity/quality message that makes this so powerful in the first place. Other possibilities? I’d love to see another video produced with the same tone/feel as their first video that really jump started their business, focuses around the “stop paying the pink tax” message that makes this campaign. One over-whelming response you’ll notice in the comments is “I liked the ad, but when I clicked to the site I felt like you were just talking to men.” Designing a web experience specifically for people that click through this ad would be final step in closing sales.

What does this mean for your brand?

Evaluate your prospects (either explicitly stated in buyer personas, or implicitly stated in the messaging and copy of current campaigns) and critically look for non-necessary elements that you could eliminate to increase the size of your potential customer base. At Dollar Shave Club they realized they were only marketing to 50% of the population, but what they were looking for in a customer was also found in the other 50% as well.

Dollar Shave Club doubled the number of potential customers in one simple campaign. Are you targeting only companies with $500M+ in revenue while smaller brands may also benefit from your product? Are you selling shoes to young athletes while active seniors might also become be interested? Is your brand artificially restricting targeting efforts because of mistaken notions of who buys your product? These are all questions to consider when building out your marketing plans for next year. 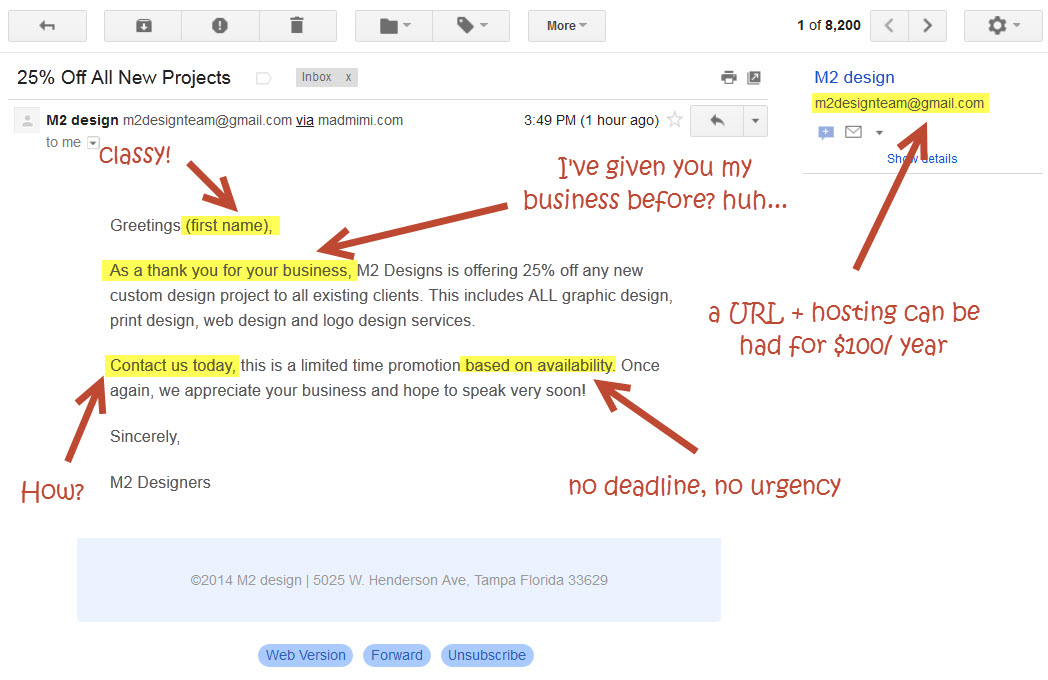 6 ways to make the worst email ever

This email landed in my inbox the other day:...
Read More

Vidyard email success: How knowing our vendors got a sale

I recently received an email from a video marketing...
Read More